The Massachusetts Good Samaritan Law protects you from prosecution if you ask for medical assistance for a drug overdose. If you are a witness or a victim of an overdose, you can call 911 without fear of legal repercussions. Because of this law, more people are willing to seek help in medical emergencies related to drug use, which means more lives are saved each day.

What is the Good Samaritan Law?

Under Massachusetts General Law, Section 34A, someone seeking medical help for themselves or someone else due to a drug overdose cannot be charged or prosecuted for the possession or use of the drug.1

This Massachusetts drug law was passed in 2012 to save more lives. Too many people didn’t receive the emergency medical attention they needed because witnesses were afraid of the legal repercussions that came with drug possession. Massachusetts combated this fear with a law that protected people⁠—putting their medical needs first.

Drug overdose treatment relies on prompt medical attention, especially in the instances of opioid overdose. If you can administer Narcan to someone experiencing an opioid overdose and call 911, a person has a good chance at recovery. The Massachusetts Good Samaritan Law encourages you to contact medical professionals as soon as you think you or someone else has experienced an overdose.

How Does the Law Protect You?

If you call 911, the Massachusetts Good Samaritan Law protects both the victim and the witness from being charged or prosecuted for the following scenarios:1

However, the law does not protect someone who has drugs with the intent of trafficking or distribution. It will also not protect anyone with outstanding charges from being prosecuted for those other charges.1

If you believe you or a loved one was a victim of a crime which led to the overdose, you can apply for State Crime Victim Compensation in Massachusetts to help cover medical costs for the treatment of an overdose.

How Many People Died of an Overdose in Massachusetts? 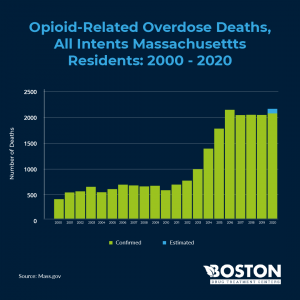 In 2020 alone, there were 2,035 confirmed deaths in Massachusetts from opioid-related overdoses, plus nearly 70 more estimated deaths.2 These are just the deaths that went reported and were confirmed. The actual statistic is likely higher. In total, the U.S. saw 70,630 overdose deaths in 2019.3Out of the deaths in 2020, 1,895 overdose deaths received a toxicology screen.2 This screening helps officials and others understand the most common causes of overdoses and death. The screening results showed the percentage of cases that included specific drugs, including the following:2

These results showed a dip in the percentage of benzodiazepine and heroin overdoses over time, but a rise in fentanyl, amphetamines, and cocaine overdoses.2

Narcan (Naloxone) May Not Be Enough

Narcan is the brand name for the nasal spray formulation of naloxone used to treat someone who has overdosed on opioids. It reverses the life-threatening respiratory effects of common opioids, such as heroin and fentanyl.4

The Food and Drug Administration (FDA) first approved Narcan in 1971.5 Since then, doctors and paramedics have regularly used it in cases of opioid overdose. Narcan is now available in pharmacies without a prescription, in Massachusetts, and across the country. If you or someone you know uses opioids, you should keep a dose of Narcan on you in case of an overdose. It’s easy to administer, doesn’t cause side effects, and cannot be misused.

But it’s important to remember that Narcan only buys the overdosing person time—once the effects wear off, a person could experience an opioid overdose again. After you administer Narcan, you need to call 911 immediately and remain with the person until first responders arrive. 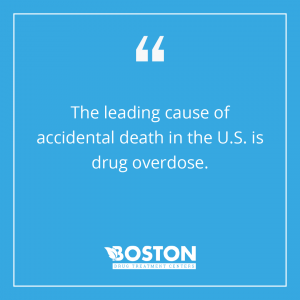 Yet, many of these overdose deaths are preventable if people take immediate emergency action to help those who are experiencing a drug overdose. To keep your loved ones safe, familiarize yourself with common signs and symptoms of a drug overdose. Many of these symptoms overlap, which makes them easy to memorize. If you notice any concerning behavior, always call 911. Don’t worry about legal repercussions because you are protected under the Massachusetts Good Samaritan Law.

The class of opioids includes prescription opioids like Vicodin, Percocet, and OxyContin, synthetic opioids like fentanyl, and illicit opioids, such as heroin.7

The signs of an opioid overdose include:7

Cocaine, a powerfully addictive stimulant, can be used for local anesthesia but is illegal for recreational use. Cocaine use is especially dangerous because dealers will often, unbeknownst to their buyers, cut their cocaine with other drugs, like fentanyl, to expand the drug and maximize their profit.

Signs and symptoms of cocaine overdose include:8

Methamphetamine is a potent psychostimulant that is chemically similar to amphetamine. A danger with meth is how quickly the effects wear off. Because the drug doesn’t last long, many people take it repeatedly in a short period of time to achieve longer-lasting results. As with cocaine, dealers often cut methamphetamine with cheap, synthetic opioids, which increases the risk of overdose.9

Signs of a methamphetamine overdose include:9,10

If you notice any of the above signs or symptoms of a drug overdose in yourself or others, call 911 immediately.

The best treatment for overdose is prevention. You and those you love can avoid drug-related overdoses by seeking rehab. Call (857) 577-8193 to speak to a treatment support specialist about finding a Massachusetts treatment program that’s right for you.

What is “Dry January?”

The beginning of the year is a popular time for people to start self-improvement projects, and it’s just about as good a time as any. If

When it comes to New Year’s resolutions, experts and laypeople tend to be divided about whether or not these have value for people undergoing treatment and

Thanks to modern pharmaceuticals, there are millions of people enjoying a quality of life that would have been impossible a few generations ago. Many millions more

Heroin, fentanyl, and other opioids remain the number one illicit drug problem in the country. With the opioid epidemic still ravaging Massachusetts and much of the United

7 Reasons The Holidays Can Cause Relapses

The end of the year can be especially difficult for people who are trying to recover from substance use disorder, for a wide variety of reasons.